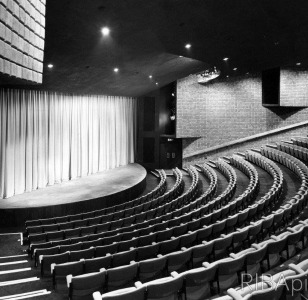 The Leatherhead Theatre, formerly known as the Thorndike Theatre, is a Grade II listed building and was the first theatre designed by the architect Roderick Ham within what was the disused Crescent Cinema. If first opened it’s doors in September 1969.

Director Hazel Vincent Wallace, whose very successful repertory theatre company had outgrown its premises on the high street, was the force behind the reopening of the theatre, raising substantial funds for its redevelopment. Her company moved and worked there, running weekly rep for 36 weeks of the year. When public funding was withdrawn and people’s theatre-going habits changed in the Nineties, the theatre was forced to close, and went dark for four years. On re-opening in 2001 it was and still is run by a charitable trust, without any public subsidy.

As well as a 500-seater auditorium and West End-size stage, the theatre also houses an upstairs bar, a coffee shop, a studio space and two conference rooms, and under relatively new business development and artistic direction, is attempting to regain something of its former glory and artistic renown. A new professional repertory theatre season starts this month (April 2018), with a view to another in the autumn, and there are plans to bring in a more diverse programme, offering something for all ages and differing artistic persuasions. The theatre still offers a cinema between live shows, as well as live screenings of West End and other shows and performances, and also now offers performance classes for children.

All of this and more can be found on the theatre’s website: www.theleatherheadtheatre.com

* Referencing carried out independently by Epsom and Ewell Families

Epsom and Ewell Families and it's affiliates accept no liability for any subsequent losses or damage as a result of using any of the services / products advertised. Any opinion’s are our own and reviewers and visitors are expected to fulfil their own due diligence before engaging with a service.