SUMMER IN EPSOM AND EWELL – PARKS IN THE LOCAL AREA 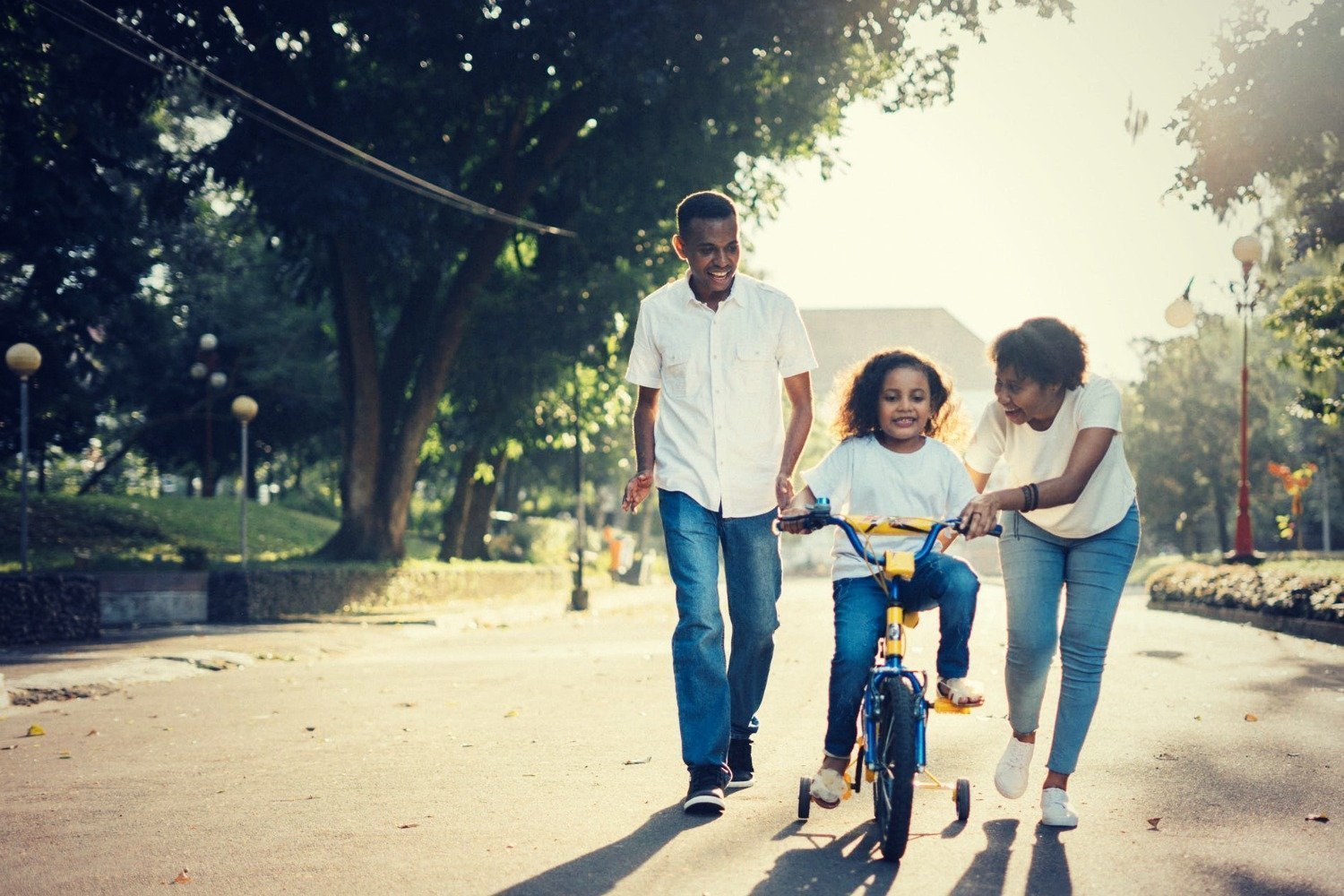 One of the best things about living in Surrey is the abundance of green space – we have parks, forests and gardens galore, a fantastic way to ensure that we get a lot of fresh air. If you are looking for a park to take your little ones to, or would like to find out about other local parks in the area, then make sure you read on.

Nestled in the middle of Epsom, Rosebery Park is a 5 minute walk from the Ashley Centre. Rosebery Park, which is a protected park due to it’s QEII status, has a large duck pond, beautiful gardens and a children’s play park. The planning of the park is still very much the same as it was when the park was first gifted to the council by Lord Rosebery – in fact, the Willow trees near the pond were planted in 1915.

Did You Know: Rosebery Park is shaped like a horse’s head.

The Warren is accessible from Beaconsfield Road or Epsom Downs. The Warren is a quiet park and has a children’s playground and outdoor gym.

Did You Know: The Warren was once The Prince of Wales’ Hare-Warren

Alexandra Park is hidden away in the side streets of Epsom, near Wallace Fields School. It is also a QEII protected park. There is free parking, fields (that are used for sporting fixtures), a martial arts centre, a bowling green, outdoor table tennis, tennis courts, playgrounds for under and over 12’s, and a pavilion. It is a popular park for dog walkers too.

Did You Know: Alexandra Park fields were dug up in First World War to grow potatoes.

The beautiful and internationally-renowned Nonsuch Park; which once featured Nonsuch Palace, built by King Henry VIII – although he didn’t ever get to see it completed. Nonsuch still exudes old world charm. You can see remnants of the palace, as you walk around the grounds. Nonsuch Park doesn’t have a play area, but many children enjoy playing in the trees in the Rose Garden or kicking a football around on the lawn in front of the Nonsuch Pantry. Nonsuch Mansion is a popular spot for weddings, due to the beautiful surroundings; and the Pantry sells fantastic coffee and tea, sandwiches, cakes… and ice cream (my children’s favourite part of visiting Nonsuch). There are also bathrooms near the Pantry. There are many ‘off-the-beaten-track’ walks at Nonsuch and there is a Service Wing Museum. It is also a popular park for concerts, has it’s own forest school and you are able to buy beautiful wooden items foraged and made by the Nonsuch Voles. 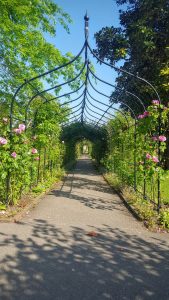 Did You Know: Nonsuch Mansion bears a resemblance to Nonsuch Palace and features inscriptions and stained glass windows that pay homage to King Henry VIII.

If you are visiting Nonsuch Park with little ones who need a play area, then you can walk from Nonsuch Park to Cheam Park. A beautiful piece of green in the bustle of Cheam Village. Cheam Park is home to Cheam Park Cafe – who host events and activities; there are also 6 football pitches, 4 tennis courts, a table tennis table, an outdoor gym, a big children’s playground, a wooden trim trail, toilets, a pavilion and a croquet and bowls club.

Horton covers a massive 400 acres of Epsom land and is made up of: a local nature reserve, Equus – an equestrian centre, Hobbledown and Horton Golf Course. The nature reserve, which is accessible from multiple points around the north of the borough, is open all year around and is accessible to pedestrians, cyclists and horse riders. There is parking on site and an area for picnics – accessible from Horton Lane. There are also various guided walks around the park, that explain the history of the park and the ancient woodlands.

Did You Know: You can still see remnants of the old railway tracks, that used to service the Epsom Hospital Cluster, in Horton Country Park.

Another park which is more about being outdoors – walking in nature – is Epsom Common. An expansive common, which reaches from Epsom to Ashtead. There are many trails for walking, cycling or horse riding, there are some beautiful lakes, flora and fauna – we have seen deer, rabbits and herons on recent walks, and you can fish in the stew pond.

Did You Know: Epsom Common made Epsom famous. A cow herd, there are still cows on Epsom Common today, discovered a spring which the cows would not drink from – he found that the water was ‘medicinal’ and from that Epsom became a Spa Town – bottling and selling the water and making salts from it.

Just down the road from Epsom Common and Horton Country Park. Court Rec is popular, due to it’s sporting facilities. It has an outdoor gym, 5 football fields including a flood-lit AstroTurf pitch, tennis courts, a bowling green, a pavilion and playgrounds for under and over 12’s.

Did You Know: Many of the oak trees are from ancient hedgerows – marking medieval footpaths from Ashtead to Ewell.

Gibraltar Rec is another popular Rec in the area. Visible from the Ewell West train station, Gibraltar is used as a ‘walk-through’ for commuters from Epsom and Ewell. Gibraltar is also popular with local families because of its 3 football pitches, netball/ basketball/ tennis courts, a bowling green, a cricket pitch, outdoor gym facilities, a playground for under and over 12’s and a pavilion. 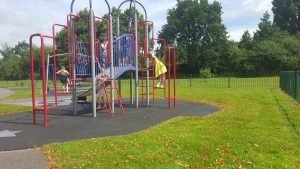 Interesting Information: Gibraltar was originally just a cricket pitch, the other facilities were added at a later date.

Possibly one of my favourite parks in the area – it ticks all of the boxes. Ewell Court has a beautiful old house which is used for weddings, activities and events, and also houses the Ewell Court library. There is a pond, a children’s nursery, a garden nursery and tea room, playgrounds within walking distance and some lovely trails along the Hogsmill. 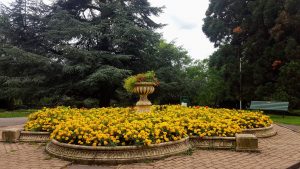 Did You Know: Ewell Court House has a secret grotto.

Within walking distance of Ewell Court, you can find Poole Road. A lot of people know of Poole Road, because of the Harrier Centre. Poole Road is accessible from Ewell Court, West Ewell or from the Hogsmill River walks. There is an athletics track, 2 football pitches, 2 tennis courts, a basketball court, a multi-use games area, Gauntlett boxing club, Giggles soft play, a playground for under and over 12’s and The Harrier Centre pavilion – which is used for activities and classes.

Did You Know: Poole Road was originally part of Ewell Court; until the developer who owned both sites gifted them to the council.

Stretching from Bourne Hall to near Tolworth, the Hogsmill is a beautiful walk. En route, there are also two playgrounds – Curtis Road in Ewell Court and Gatley Avenue in West Ewell. Curtis Road is a small playground with basic equipment suitable for under 12’s. Gatley Avenue was refurbished in 2016 and includes tunnels, climbing webs and a zip wire.

Did You Know: 19th-century artist John Everett Millais was inspired by the Hogsmill River and it is believed that he painted ‘Ophelia’ on the banks of the river.

While it does not have a play area, all children seem to love Bourne Hall. It has appealing gardens to play and hide in, a duck pond, a library, a museum, a cafe, toilets, and on-site parking (pay and display). There are also regular events – history, family, local shopping and performance. 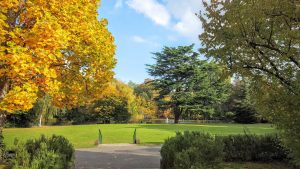 Did You Know: The dog on the top of the entrance to Bourne Hall is believed to depict a dog that saved someone from drowning.

Hidden behind a bus stop on Chessington Road, just passed Green Lanes, Chessington Rec is one of the smallest rec grounds in the area. It has a large field and play equipment for under and over 12’s. Chessington Rec is also a QEII park, therefore protecting it for future generations.

Did You Know: Chessington Rec, known locally as Bakers Field, got the name Bakers Field from Jo Baker – who used to lived in the house next to the Rec.

Just up the road in Salisbury Road, Worcester Park; Shadbolt Park consists of a tranquil garden park and a playground, outdoor gym and playing field. There is also a pond and limited disabled parking at the Shadbolt Park House Surgery.

Did You Know: Shadbolt Park House Surgery was originally a library.

Also on Salisbury Road, Worcester Park; Auriol Park has the title of being a King George V playing field. Auriol Park has a football pitch, bowling green, 2 tennis courts, a playground, a multi-use games area and a lovely cafe. There is parking on site. Auriol Park also plays host to the annual Trifest, happening at the end of August.

Did You Know: Auriol Park was once part of the Nonsuch Palace lands, and then was home to Auriol Barker’s Polo ponies from the 1890’s.

Epsom has two skate parks in the area – one in Long Grove Park and one in Watersedge. Long Grove has BMX and skating facilities, a playground and is dog-friendly too. Watersedge is exclusively a skatepark.

If you fancy a little garden walk in the area there is Mounthill Gardens – just opposite Epsom playhouse, and Elizabeth Welchman gardens – near the roundabout that connects Burgh Heath road to Downs Road. Dogs are welcome at Mounthill but not at Elizabeth Welchman.

As you can see, there are many green spaces to visit in Epsom and Ewell – I hope that you have found some new ones. There are also loads of fantastic places to visit in Sam’s 5 National Trust Sites to Visit, Fran’s 7 Farms to Visit this Summer or Kat’s 13 Places to Splash this Summer blogs. I’m sure you will find something to keep you and the family busy.

Many of these local parks have regular events, make sure you follow Epsom and Ewell Families on Facebook or subscribe to the newsletter to receive our What’s Happening Blog.

*All photos were taken by Kalli Pasqualucci and information correct at the time of publishing.